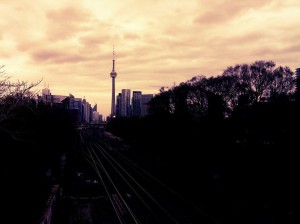 The larger the bag the worse things get.

It was 2004 and my second trip to Toronto, I was not a first time flyer but looking back I really was inexperienced. I sat at the base of the carousel waiting like a lost puppy for my bag. My laptop and everything I needed for the week ahead was in it. As the last of my fellow passengers came and went collecting their bags as I just became dumbfounded. Feeling the confusion and dread take over; I with my puppydog face started seeking out help somewhere, finding someone to help me from Westjet was the hardest part. You should have seen me a lost puppy dog wandering around asking who I can talk to, with a little luck I found an actual airline employee. She was kind and respectful of the situation but really bloody unhelpful, contact numbers exchanged I left the airport empty handed.

The next day after going shopping for the basics and getting some clothes I got a phone call from Westjet saying they have tracked down my bag full of everything I needed and it was on its way to Toronto. She was really uncomfortable telling me that my bag was in ah kelowna…… huh?

Just before my departure at the airport I once again got my bag and checked it headed home to the prairies. Did I really need all of that shit l lived without?

Both Delta and Westjet are great airlines that happen to have one big thing in common, both lost my bags, fitting how they’re both trying to create there own little useless alliance. I have a little hatred for the Atlanta based airline even when I am not sure they deserve it even after messing with my reward miles. Westjet at least got my bag back, Delta on the other hand did a failed magic trick with mine but could not make the rabbit reappear.

I don’t agree that people should be allowed to carry on stupidly large amounts of stuff, but I am sick of hearing from bloggers and airlines that the carry-on’s should be something we start charging for because after all the experience I have had I hate checking bags. Flight crews are the first to see and complain about the issues with carry on bags, but almost all flight crews carry on their baggage!!! I can’t imagine a pilot or crew member getting a good sleep after losing his luggage and has only what he was wearing on the journey up at the start of a 5 day tour. Most of the time I do travel with just one bag, but on longer or work trips I have checked a few pelican cases of gear and never lost them. I am always thinking of ways to make my bag lighter and cringe when more than one is required but it does happen.

It was a real learning experience back then losing my stuff, now I just keep calm and carry it on when ever I can! I do expect the airline to screw stuff up.

Next week I will be back in Winnipeg and then Edmonton.

The picture was taken in Toronto as I walked with my one bag to the downtown airport. Keep calm and carry-on!